Lords of the wood

A constant exchange of ideas and experiences between two masters of the wood who, before being workers, are true artists. 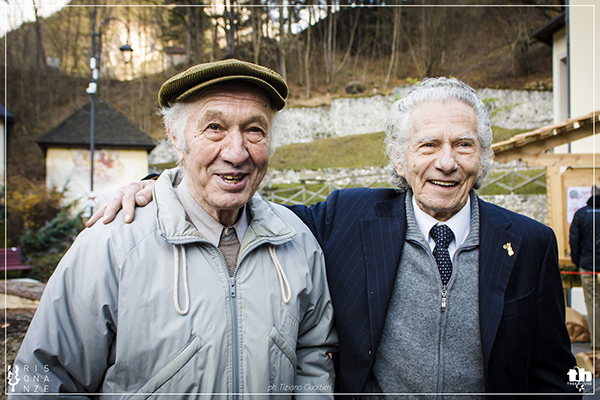 The union between Bruno Deotto and Gio Batta Morassi was just this: a natural bond between someone who knew every little secret of wood and someone who, thanks to an exceptional intuition, was able to give that wood a voice.

Bruno and Gio Batta are two key figures not only for the Risonanze festival, but for the entire Valcanale and Friuli Venezia Giulia: two people who are as humble as they are capable of giving vent to their passion to such an extent that they succeeded in transforming it into a true vocation.

Friends of the same age since childhood, they had been students at the same professional school. Then their paths diverged for about thirty years, not only because they each wanted to pursue their own dreams but also because life had offered them different hopes.

Bruno had stayed in the valley to work as a woodcutter in ‘his’ forest, while Gio Batta had left the area and moved to Cremona where he was able to pursue the opportunity of becoming a luthier, beginning a career that would lead him to become one of the most important on the entire European scene, to the point of being considered Stradivari’s worthy heir.

Two extremely different paths. Yet there is nothing to be done about it, if fate has decided that two people are complementary, sooner or later it will find a way for them to meet again. And fate had already decided that the lives of these two grown-up children should intertwine once again.

We are in the mid-1980s and Morassi, who every summer returns to “his” trees from which he will never really detach himself, partly because since the 1950s he has discovered that they conceal a secret, contacts his old friend because there is a spruce tree to cut down. It’s Bruno’s job!

He knows that Gio Batta is always on the lookout for special wood, and amongst the curls and sawdust he shows him some pieces of wood. Up until that moment they were just normal pieces of spruce, but Bruno couldn’t imagine that those same pieces of wood would soon become the first drops of a special ink capable of rewriting the history of the woodlands of Val Saisera.

Although he is a great connoisseur of wood, Bruno can’t even imagine that this wood, properly shaped by the skilful hands of Gio Batta, will become one of the first sounding boards of a material that the whole world will learn to admire, the resonance wood of the Val Saisera “the best resonance spruce in the world” as Morassi himself used to say.

Bruno and Gio Batta were two figures from another era, always ready to talk to each other and give each other precious advice, men able to maintain an unaltered relationship for over thirty years without a single argument or brawl. Only a great harmony, the real secret of a friendship capable of going beyond personal interests and gains.

Bruno was able to work the wood with such refinement and precision as to reduce waste to a minimum and allow the material to always have the greatest performance, and Gio Batta was able to refine the raw material to such an extent as to transform his method into a standard now used not only in Italy but also abroad.

Davide, Bruno’s son, explains how the bond between his father and one of the most famous luthiers, but also and above all between his father and the family, was born almost by chance thanks to a series of fortunate coincidences. A sincere bond of trust, facilitated by having lived together through a difficult childhood that forced those born in the mountains to make do with the little they had in an attempt to guarantee themselves a decent future.

Also because, on the one hand, there was Bruno, who knew a very rich forest inside out, and on the other, there was Gio Batta, who knew the musical value of what was “hidden” under a rough bark. Different sensibilities that would perhaps have remained an end in themselves had they not had the opportunity to meet and merge to give life to a dream.

Like all dreams, however, things were far from easy: there were many mistakes, trials and attempts. Bruno and Gio Batta, who needed little to understand each other, never let themselves be overwhelmed by the first difficulties, as if they knew that the technique of one and the experience of the other would be the right mix to create something special.

“The two woodworking friends” have left us two years apart, but their priceless legacy of experience, passion and skill has not been lost.

It is now carried on by their sons who, just as their fathers did, have learned from the past and continue the tradition that will forever unite a master carpenter and a master luthier: two lords of the wood.

In a moment of rest, Bruno takes the chance: he knows that Gio Batta is always on the lookout for a special wood and among curls and sawdust he shows him some boards. Up to that moment they were just normal pieces of spruce, but Bruno couldn't imagine that in a short time those same pieces of wood would become the first drops of a special ink capable of rewriting the history of the woodlands of Val Saisera.